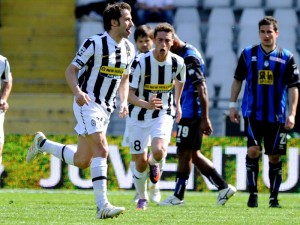 While they can also keep the Serie A title chase interesting by defeating Juventus, Atalanta need a victory to edge closer to European qualification.

The Bianconeri hold an eight-point advantage at the league summit, but they also have important Champions League fixture against Monaco coming up.

Famous for their impressive youth academy, Atalanta never quite managed to challenge for major honours, although they did lift the Coppa Italia trophy back in 1963.

Their best ever finish in the top flight is fifth, achieved in 1948, and Orobici now have a chance to not only match the record, but also improve it.

Playing great football either side of the embarrassing 7-1 loss to Inter Milan, Orobici have 8 wins and 4 draws in last 13 league games, which gives them reason for optimism ahead of the clash with mighty Juventus.

Atalanta were beaten two times already this season by the Bianconeri, but not after giving them a real run for their money.

Juventus are wrapping up yet another successful Serie A campaign, and everybody agrees that sixth consecutive league title is already in the bag.

The Bianconeri are eight points clear of second placed AS Roma with five games to go, but they cannot afford to relax just yet.

With games against Atalanta, Torino and AS Roma coming up, there is still a chance for the Giallorossi to catch them, and that is why Max Allegri and his side will take the clash in Bergamo very seriously.

Wednesday’s Champions League clash against Monaco may have the priority, and with that in mind, the boss may decide to make some changes to the starting line-up.

The good news is that Juan Cuadrado and Miralem Pjanic return from injury and suspension respectively, but Marko Pjaca is a long-term casualty.