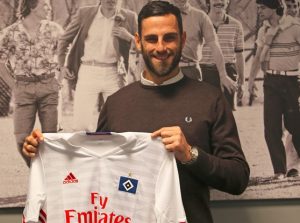 Bundesliga outfit Hamburger SV took it to the club’s official site to announce the signature of Albanian defender Mergim Mavraj.

Cologne defender arrives to Hamburger SV for an undisclosed fee and on a three-and-a-half-year deal.

Hamburger SV have acquired a valuable asset that is sure to help Die Rothosen in their fight against relegation.

Having replaced their chairman Dietmar Beiresdorfer, whose dealings in transfer market failed to pay dividends, with Heribert Bruchhagen, Die Rothosen have thus opened the January transfer window in attempts to add quality to present manager Markus Gisdol’s side.

Sitting in 16th place in the Bundesliga standings, HSV have managed to collect 31 points out of 16 games in 2016, but went on a holiday break on the back of the 2-1 home win over Schalke.

The experienced 30-year-old Mavraj accepts that decision to join the club fighting against the relegation might sound surprising, but he has no doubts the right choice has been made.

“My contract with Cologne was expiring and people in charge of HSV together with the coach have shown great interest in me which ultimately led me to take this step”, Mavraj said.

The Albania international, who featured in all three of his country’s Euro 2016 matches, will be hoping to get a debut with his new club on 21 January as HSV return to Bundesliga duties with a trip to Wolfsburg.