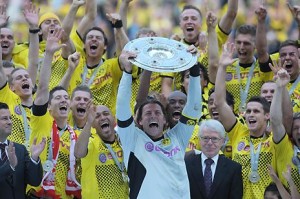 After we took notice of the title contenders in the German Bundesliga Season Preview part 1, the second part of the preview will be all about the mid table sides and those that could even enter the race for European places if they hit the ground running early into the season. Teams that are likely to enter the difficult relegation race will find their place in part 3 of our preview.

Hamburger gave been underachieving for quite a while, so no wonder their fans are eager to see their side fighting for European places again. That doesn’t look like happening this season, not after the club stayed without Ruud Van Nistelrooy, Joris Mathijsen, Piotr Trochowski, Ze Roberto and Jonathan Pitroipa, but HSV should still have enough in them to finish the season in mid table. Former Chelsea official Frank Arnesen has brought with him some very talented youngsters in Gokhan Tore, Michael Mancienne, Jeffrey Bruma and Jacopo Sala, while Per Ciljan Skjelbred arrived from Rosenborg to add more creativity to midfield. After getting rid of several experienced players, the club management have clearly decided to rejuvenate their squad and with so many inexperienced players at Michael Oenning’s disposal, we shouldn’t expect too much of this team for another couple of years.

Stuttgart are coming back of a very disappointing season that saw them even enter the relegation race, although poor displays in Bundesliga can be attributed to their Europa League campaign. With no European distractions this season, the Swabians are hoping for a better season, and the 3:0 opening win over Schalke gives them a lot of reason for confidence. The squad is almost the same as last season, seeing that only Christian Trasch and Ciprian Marica left, while Maza Rodriguez, Hajnal and Kvist were brought to improve the quality of the squad. Coach Bruno Labbadia has found a good blend of youth and experience, even if there are no big names on the team sheet. The boss even has some very good options on the bench, and the big squad will come in handy in the latter stages of the season.

Having finished last Bundesliga campaign in 11th place, Hoffenheim will be looking to improve on that result, and the first signs look very positive. Star player Ryan Babel should be able to raise the standard of his performances after settling at the club, while Chinedu Obasi has finally recovered from injury and that will be a big boost for the team. Talented coach Holger Stanislawski is expected to get the maximum out of his players, although it has recently been revealed that start striker Vedad Ibisevic will miss up to eight weeks with injury and that could be a problem. The club managed to keep hold of captain Andreas Beck despite the heavy interest from Juventus, while talented youngsters Schipplock, Johnson, Casteels and Musona all arrived to try and prove their worth at the biggest stage.

Midway through last season it looked as though Borussia would have no chance of keeping their Bundesliga status, but everything changed with the arrival of former Hertha boss Lucien Favre. The talented boss managed to help the players restore the lost confidence and that proved to be the key to survival. With solid base already set, Borussia fans have every reason to hope for a promising season, especially as the club managed to keep hold of their star players, as well as add few talented footballers to the side such as Oscar Wendt, Lukas Rupp, Yuki Otsu and Joshua King. Lucien Favre’s side proved they will be tough nut to crack this term by holding both Porto and Sunderland to goalless draws in pre-season, so I believe they will have no problems avoiding relegation this season.

Led by talented coach Mirko Slomka, Hannover were the surprise package of last year’s Bundesliga, and the mere fact they fought mighty Bayern for the final Champions League berth until the final day of the season speaks volumes about their achievements. This season will be a lot more difficult for the 96ers, especially if they manage to qualify for the Europa League group stages, so a mid table finish looks very likely for them. Coach Slomka managed to keep hold of all important players, while Christian Pander, Artur Sobiech and Henning Hauger arrived to increase competition for places. Hannover managed to win their opening game against Hoffenheim without captain Steven Cherundolo and top scorer Didier Ya Konan, so the team will be even stronger when the duo returns into action.

Pick: Didier Ya Konan to be top Bundesliga goalscorer

Together with Hannover, Mainz were the biggest overachievers last season and they did remarkably well to finish the league campaign in 5th place. However, the club were forced to sell two key players this summer, Fuchs and Schurrle, while they invested the money wisely and brought nine new players. Extremely talented coach Thomas Tuchel will need some time to rebuild the squad, but once that happens, Mainz will be just as dangerous as last term. Nevertheless, I am afraid that by then Mainz will have already lost too many points to be able to mount a serious challenge for European places, and seeing that this will probably be a consolidation season for Thomas Tuchel’s side, they probably won’t be too disappointed with mid table finish. Mainz have already been eliminated from Europe, going down to Romanian side Gaz Metan.