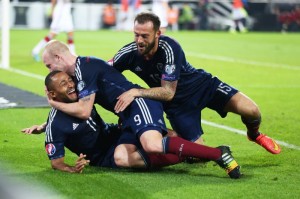 Scotland national team suffered another blow to their qualifying hopes as they were beaten at home by Germany, but head coach Gordon Strachan believes all is not lost.

The Tartan Army were sitting in third place in Group D ahead of the double header against Georgia and Germany, but two defeats that ensued saw them slip to fourth in the standings.

And with Scotland trailing third-placed Republic of Ireland four points ahead of the last two matches, many believe the Scots would fail to reach the tournament finals.

Nevertheless, Gordon Strachan does not share the same opinion, probably due to the fact that the Irish face two difficult matches against Germany and Poland.

“Unless the points are different from what I see, they (Ireland) are catchable,” Strachan told Sky Sports.

“We have two games and if we win them, we’ll see what happens. We’re still in it and we still have a chance of being in France next summer.

“The players need to go and watch a video of their performance. They should be proud of themselves.”

And with Scotland hosting Poland before facing Gibraltar in the final Euro 2016 qualifier, they can be backed at 8.00 (7/1) to qualify for the finals.