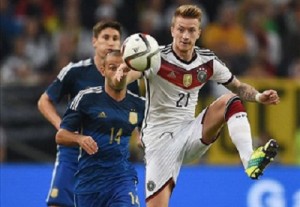 World Cup holders Germany start the Euro 2016 qualifying campaign at home against Scotland, with die Manschaft hoping to make amends for the friendly defeat to Argentina.

Their opponents arrive at Signal-Iduna Park as major underdogs, but their hard-working approach could make life difficult for the hosts.

Germany produced quite a coup by lifting the trophy at the 2014 World Cup, but the triumph came at a cost as it prompted Philipp Lahm, Per Mertesacker and Miroslav Klose to retire from international duty.

However, the majority of the squad that starred in Brazil is still at Joachim Low’s disposal, plus Marco Reus and Mario Gomez, who return to the fold.

Die Mannschaft were far from impressive in midweek friendly against Argentina, losing 4-2 in Dusseldorf, but, as Gordon Strachan pointed out, ‘they (Germans) are a different animal’ when they need to compete.

Therefore, even with several important players missing through injury, home win pays as little as 1.17 (1/6) at Betfred.

Marco Reus and Jerome Boateng are both expected to start after recovering from injury, but Mesut Ozil and Mats Hummels have failed to prove their fitness.

Bastian Schweinsteiger, Sami Khedira and Julian Draxler miss out as well, but Christoph Kramer should keep his place after impressing against Argentina.

It’s now been 16 years since Scotland last qualified for a major tournament and Gordon Strachan and his men are desperate to end the barren run.

The Scots have shown a massive improvement since the former Celtic boss took over, and are currently on a six-match unbeaten run (W4 D2).

Having been placed in the same group as Germany, Ireland, Poland, Georgia and Gibraltar, Scotland clearly have a chance to reach the tournament finals, but they will have to work hard in order to realise their potential.

They clearly face a mountain to climb when facing the World Cup holders, but with their opponents missing quite a few first team regulars, you should know Scotland are 5.50 (9/2) not to lose in Dortmund.

Gordon Strachan has had Graham Dorrans, Christophe Berra and Andy Robertson withdraw due to injury, with Aberdeen defender Mark Reynolds receiving a late call up.

Captain Scott Brown and Robert Snodgrass miss out as well, but Charlie Mulgrew has recovered and in-form Steven Naismith is expected to lead the line.