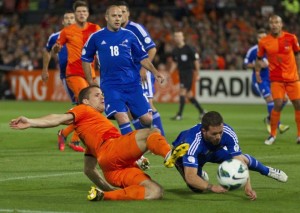 While Netherlands could only score three goals past minnows Andorra, Romania produced quite a coup by beating Turkey away, which should give them the extra edge over their opponents.

Having largely struggled in the last few qualifying campaigns, Tricolori were not really expected to enter the race for top two places in their 2014 World Cup qualifying group.

Victor Piturca’s side, nonetheless, got off to a great start, beating Estonia and Andorra in September, before masterminding an impressive victory in Turkey.

Romania thus staked their claim for the first place in the group and with the team boosted by three straight victories, they are 5.50 (9/2) with Betfair to continue the amazing run.

The hosts are still without Stefan Radu, Banel Nicolita, Alexandru Matel and Cristian Tanase, but there are no fresh injury worries.

Boss Victor Pitruca is unlikely to make changes to the starting line-up, meaning that Adrian Mutu will again have to settle for a place on the bench.

Oranje started the 2014 World Cup qualifiers with an unconvincing victory over Turkey, but everything soon fell into place as victories over Hungary and Andorra ensured the team keep 100% record.

Despite not yet playing to their potential, Netherlands remain hot favourites for the first place in the group, while they are 1.73 (8/11) with Stan James to win in Romania.

Louis van Gaal has added Eljero Elia and Jordy Clasie to the squad after it was revealed Arjen Robben would not be able to recover from a hamstring problem.

Wesley Sneijder, Tim Krul and Jetro Willems continue to miss out, while Ruben Schaken was forced to withdraw because of a knee problem.

Louis van Gaal is expected to make several changes to the team that beat Andorra on Friday, with Robin van Persie and Luciano Narsingh expected to start.