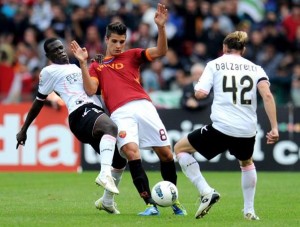 Palermo slipped to ninth place after the disappointing home defeat to Milan, whereas Roma lost the local derby to Lazio, meaning that both sides will have something to prove in this clash.

You are probably well aware of the fact that Palermo are one of the best Serie A hosts as well as one of the worst travelers in the elite division, which makes them pretty predictable.

The Rosanero remain one of just two teams without an away victory this season, but their impressive home showings more than make up for the dismal performances on the travels.

Boasting a four-match winning run at home and the 10-0-2 record at Renzo Barbera, Bortolo Mutti’s side were expected to cause leaders Milan all sorts of problems last weekend, but they instead suffered a 4-0 defeat, to the dismay of the home fans.

That was the second successive game in which Palermo conceded exactly four goals, so there are no doubts the Rosanero go into this game low on confidence, but with their opponents in similar mood, odds of 2.75 (7/4) offered by BetVictor on home win could be worth a shot.

Federico Balzaretti and Eros Pisano return from suspension and injury respectively, but Matias Silvestre and Armin Bacinovic continue to miss out. Giulio Migliaccio is doubtful with a muscle problem.

This season keeps going from bad to worse for Roma and it now appears that the Giallorossi will not be able to ensure European qualification.

Having dropped out from Europa League and Coppa Italia, Luis Enrique’s side were expected to put on a good run of results in Serie A and improve their league position, but that never really happened.

Following away defeats to Siena and Atalanta, and home win over Parma, Roma were beaten by arch rivals Lazio last time out and now sit five points behind fifth-placed Napoli.

The atmosphere in the team is at an all time low as the players are starting to lose confidence in Luis Enrique’s abilities and away win, therefore, doesn’t look like a good bet here, even if the odds are 2.88 (17/9) at 888sport.