Denmark U21 vs Belarus U21 preview 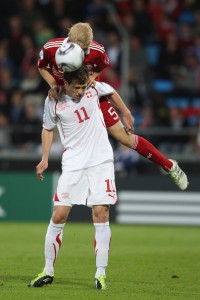 Having lost their opening game against Switzerland, Denmark have no choice but to try and win this game, whereas Belarus would be more than satisfied with one point from this match.

The hosts played well in their opening game against Switzerland, but unlike their opponents they failed to take their chances and are now in a position to need two wins from as many group games to qualify.

A win over Belarus would see the Danes return to contention for the top two places, especially as Belarus won their game against Iceland, so you should know the hosts are 1.80 (4/5) with Stan James to claim maximum points, which is by far the highest price on the market.

Coach Keld Bordinggaard has no fresh injury worries and we are unlikely to see too many changes to the team that started the Switzerland game.

Belarus produced quite a coup by beating Iceland 2:0 in their opening game, especially taking into account the fact that they had started the game without several first team regulars.

The Eastern Europeans struggled to break Iceland, but managed to score two late goals and record an important win, meaning they will now settle for one point against Denmark.

Being deprived of several important players, coach Kondratyev served up a couple of surprises in the starting 11, but that produced good result against Iceland, to the delight of Belarus fans.

The gaffer could now have midfielders Nekhaychik and Gordeychuk back to the side after recovering from injuries.