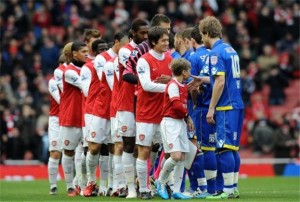 With the FA Cup victory over Manchester United at Old Trafford still fresh in their minds, Leeds United will be hoping to produce another major upset when they travel to the Emirates.

Arsenal, on the other hand, need a morale-boosting victory after the disappointing defeat to Fulham, with Thierry Henry’s return to the club an extra motive for the home side.

The mere fact that the Gunners are still in the race for the top 4 finish after such a disappointing start to the season shows that Arsene Wenger’s side have come a long way this term.

Their good run of results came to an abrupt end as the Gunners were beaten by Fulham after conceding two goals in the dying moments of the game.

Arsenal now need to avoid another upset in order to return to the right track, but they need to be wary of the side that almost beat them at the Emirates in the same fixture last season.

Even if Arsene Wenger is set to rest several starters against Leeds, his side are still seen as hot favorites to win the game, with home win paying 1.30 (3/10) at Ladbrokes.

Thierry Henry is expected to start, with Robin van Persie set to get some much needed rest, but Gervinho is away on international duty.

The aforementioned victory over Manchester United, which was achieved at the time when the team were playing League One football, hinted that Leeds would soon return to where they belong, and the Whites did not disappoint.

After gaining promotion to the Championship, Leeds United narrowly missed out on the play-off places last season, but they are determined to make things right this term.

Following the bright start to the new league campaign, the Whites quickly climbed to the play-off places, although they have recently suffered a small dip in form, with injuries to key players Snodgrass and Howson the main reason for that.

Simon Grayson’s side managed to end the three-match losing run as they came from behind to beat Burnley, and even if they cannot be trusted to spring a surprise at the Emirates, odds of 1.80 (4/5) offered on Leeds to score look too good to pass.

Important defender Patrick Kisnorbo has been ruled out for the season with a knee injury, whereas Tom Lees and Alex Bruce are rated doubtful. Roberto Snodgrass and Jonny Howson continue to miss out.