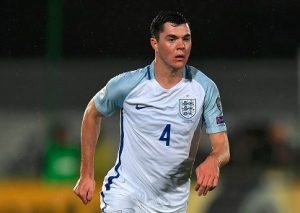 Michael Keane has been called into the England national team for the upcoming international friendlies against Germany and Brazil.

The Everton defender returned to action this weekend in his team’s 3-2 win over Watford and Gareth Southgate decided to include him in the squad following the withdrawal of Tottenham midfielder Dele Alli.

Alli missed Spurs’ win over Crystal Palace due to a hamstring injury whereas Michael Keane successfully healed from his foot infection.

The 24-year-old centre-back made a debut for England in March 2017 against Germany and is expected to play a part in a match Three Lions are backed at 2.60 (8/5) to win.

England play host to Die Mannschaft at Wembley on Friday before welcoming Brazil at the same stadium four days later.

Southgate will be hopeful Tottenham in-form striker Harry Kane and his teammate Harry Winks will be ready to join up England in time for the two matches, whereas Chelsea defender Gary Cahill will also go through a late fitness test before teaming up with the rest of the England squad.

Liverpool captain Jordan Henderson missed Liverpool’s triumph over West Ham due to a thigh issue but is expected to be in the England squad.