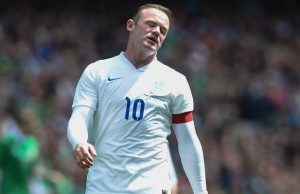 The Three Lions suffered a fresh setback on the eve of Tuesday’s friendly encounter with Spain at Wembley as captain Wayne Rooney picked up an injury that will keep him out of the clash.

Manchester United captain returned to England’s starting line-up for Friday’s compelling 3-0 triumph over Scotland in World Cup qualifying after having started the previous match on the bench.

Despite Rooney’s injury is just a minor knee issue, according to Gareth Southgate, the captain will be left out of the starting berth with Liverpool midfielder Jordan Henderson ready to fill in as captain.

Henderson captained England in their goalless stalemate in Slovenia and will be given the honour to wear the armband once again.

“I don’t think we have just one captain. We have several leaders. Too much responsibility has been on Wayne and we need to share that. Once you have a team of those leaders you can have a lot of success”, Southgate told on Monday evening.

England boss will assess Rooney’s fitness prior to the game, but Manchester United midfielder will start the game on the bench even if he is deemed fit.

Ryan Bertrand also missed the Monday training through injury although Southgate remains hopeful that both players would be available to play some part in the game against the 2010 world champions.

In addition to Rooney and Bertrand, Southgate is sweating over the fitness of Tottenham striker Harry Kane who has been ruled out of the match with an ankle ligament problem.

The match against Spain is the fourth and final game for Southgate in his tenure as interim manager, but former Middlesbrough man has been tipped to be offered a job on permanent basis.

Southgate has so far recorded two wins and one draw in three 2018 World Cup Qualifiers.

England are given the betting odds of 3.50 (9/4) @BetVictor to beat Spain at Wembley and there is no doubt that a possible win would significantly increase Southgate’s chances of landing a full-time job with England.

The FA are reportedly ready to reward Southgate with a four-year contract worth £1.5 milion a year.