Who will steal the show at Villa Park? 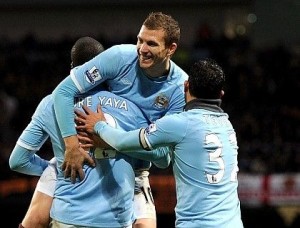 Relegation threatened Aston Villa broke the bank to sign Darren Bent and it is little wonder the Villans expect the striker to help them beat high-flying Manchester City.

The England international will go straight into the starting line-up for this clash, just like another January signing, Jean II Makoun, who arrived from Lyon just few days ago.

Stephen Ireland is the only unavailable player at the moment, meaning Gerard Houllier will be able to field a very strong side.

Manchester City are currently tied on points with leaders United after dropping just two points in their last five league games and there is no doubt they will be looking to win at Villa Park as well.

Mario Balotelli and Micah Richards remain sidelined, but Edin Dzeko is set for another start alongside Carlos Tevez in attack with the City fans eagerly awaiting his first goal in the light blue shirt.