WHICH PREMIER LEAGUE PLAYERS WILL SWITCH CLUBS BEFORE THE WINDOW CLOSES? 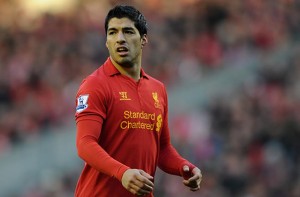 In a summer of protracted transfers, a number of big deals are still yet to be done, if of course they are to be done at all.

The future of Luis Suarez is what has stolen the most column inches since the end of last season, with Arsenal the favourites to secure his services ahead of Real Madrid and Chelsea, though the bookmakers make Anfield his most likely destination after the transfer window closes.

Sporting Bet offer odds of 1.5 (1/2) for the Uruguayan to leave Liverpool, while the same firm offer the same price for Leighton Baines to call time on his Everton career.

Premier League champions Manchester United are odds on to sign the England international, while they are second favourites behind Arsenal to secure a deal for his teammate Marouane Fellaini.

The Belgian is 1.53 (8/15) to leave Goodison Park this summer, after five years with the Toffees, during which time he has clocked up 172 appearances.

Wayne Rooney, who of course began his career on with the Blue half of Merseyside, is 1.57 (4/7) to be sold by Manchester United.

Chelsea are odds on favourites to sign the player who has been reportedly pinpointed as Jose Mourniho’s only transfer target this summer, while Arsenal may also enter the race if they are unable to secure a deal for Luis Suarez.

Aston Villa striker Darren Bent heads the list of those likely to be moving on this summer, with Sporting Bet offering 1.33 (1/3) for him to sign for what would be his sixth Premier League side, should he remain in England.

Newcastle United and Fulham are the favourites to sign the 29 year old, who has hit 103 Premier League goals across spells with Ipswich Town, Charlton Athletic, Tottenham Hotspur, Sunderland and Villa.

Bent’s teammate Christian Benteke is also on the list, despite him withdrawing his transfer request and signing a new contract with the West Midlands club last week.

The Belgium international, who was reportedly a target for Spurs, is priced at 6.5 (11/2) to change clubs before the transfer window closes on August 31st.