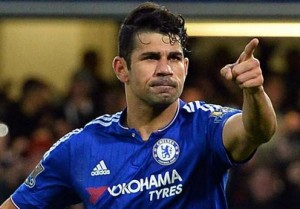 Chelsea forward Diego Costa has been heavily linked with a move back to Vicente Calderon in recent months and the latest reports from Spain claim that the Spain international striker has already informed Chelsea’s hierarchy of his intention to return to Atletico Madrid.

Following a successful debut season in the Premier League, Diego Costa struggled last campaign both on and off the pitch and rumours of his desire to return to his former club have grown stronger and stronger in recent weeks.

Madrid-based newspapers AS confirm that Costa still wants to leave Stamford Bridge, but also claim that a return to Atletico Madrid could turn into a complicated affair for the Brazilian-born striker as Antonio Conte and Roman Abramovich alike are not willing to let the 27-year-old go until they have secured a proper replacement as the Italian tactician is keen to strengthen his squad and compete for honours after a disappointing season for the Blues.

Chelsea want to get back in frame for the Premier League title and are currently at the odds of 7.5 (13/2) @BetVictor to lift the trophy at the end of 2016/17 season.

The Blues have already signed Michy Batshuayi from Marseille, but the Stamford Bridge club want to add a top level striker to their ranks. Alvaro Morata has been one of the top targets for Blues this summer, but the Spanish striker appears to be set to remain at Real Madrid next season.

Diego Costa however wants to follow the footsteps of Felipe Luis, who returned to Atletico Madrid after just one season with Chelsea.

At the same time Atletico Madrid president Enrique Cerezo has refused to rule out the possibility of Diego Costa’s return from Chelsea suggesting that “everything is possible in football”.

Costa has already been linked with Atletico Madrid in February and Cerezo added that signing a striker remains a top priority for manager Diego Simeone thus adding fuel to transfer rumours.