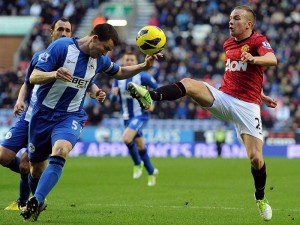 Judging by the start of his career at Old Trafford, fans are right to expect a tumultuous season, with very little going according to plan in the early days of Moyes’ reign.

While seeing a number of players from their hit-list snubbing United in favour of other clubs, the Red Devils have also failed in their pursuit of Cesc Fabregas, meaning they are still on the lookout for a high-profile midfielder.

Meanwhile, their performances in pre-season have been pretty disappointing, but that is nothing that a Community Shield trophy cannot solve.

However, with the team clearly far from the desired form at the moment, there is little value in odds of 1.36 (4/11) offered at William Hill on home win.

Given that United have been conceding goals for fun of late and that these matches usually produce plenty of goals, odds of 2.00 (1/1) offered at Stan James on both teams to score do look tempting.

Nani and Jonny Evans have recovered from injury, while captain Nemanja Vidic stepped up his fitness by playing 90 minutes in the friendly against AIK.

Wayne Rooney is unlikely to feature despite being called by England boss Roy Hodgson for Scotland friendly, while Darren Fletcher and Nick Powell remain sidelined.

Everybody agrees that Wigan did not deserve to get relegated from the Premier League, but having failed to produce another great escape the Latics are now hoping for a straight return to the elite division.

The club chiefs seem to have found just the man to replace Roberto Martinez, with Owen Coyle already looking like a great choice.

Even if the likes of Kone, Figueroa, Scharner and Alcaraz were allowed to leave, the team don’t look much weaker than last term, with McClean, Barnett, Holt, Fortune and Carson arrving among others.

Many people thought Coyle would face problems during the squad rebuilding process, but the 4-0 away win over Barnsley at the start of the Championship campaign would suggest otherwise.

Having pipped the then reigning Premier League champions Manchester City to the FA Cup trophy, the Latics are 6.50 (11/2) with Ladbrokes to produce another major upset and lift the Community Shield title.

New signing James McClean could play some part, but Ivan Ramis and Gary Caldwell are out through knee and hip injury respectively.

Get Your £88 in Free Bets!
Best Money-Back Specials for Premier League football with PaddyPower. £50 FREE
We Highly Recommend These Places
Share your Opinion!