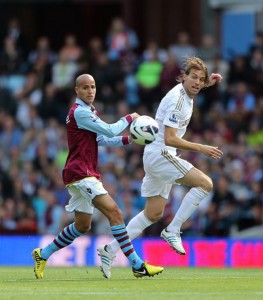 Aston Villa are in desperate need of a morale-boosting win following their fourth straight defeat and they have no choice but to attack Swansea from the off.

The Swans are also struggling for form at the moment, seeing as how they have failed to win any of their last five fixtures in all competitions.

Having bravely fought relegation last season, Aston Villa were expected to build on that result this term and avoid the relegation tussle altogether, but they haven’t quite managed to live up to the expectations.

Paul Lambert’s team were doing pretty well until recently even with star striker Christian Benteke far from his best, but the latest run of results is threatening to ruin their season.

Aston Villa have now suffered four straight defeats in the league, with Boxing Day loss to Crystal Palace at Villa Park probably the lowest point of the campaign.

As a result, Villa sit just three points above the bottom three, and are priced at 2.88 (17/9) to return to winning ways against Swansea.

Christian Benteke, Ron Vlaar, Jores Okore, Joe Bennett and Charles N’Zogbia continue to miss out, but the good news is Ashley Westwood is available after serving a suspension.

Swansea did brilliantly to win the Capital One Cup last term and secure Europa League football, but it looks as though the European campaign has taken the wind out of their sails this season.

With star forward Michu struggling through injury from the very start to the season and new signing Bony yet to hit the ground running, the Swans have experienced quite a few problems in the Premier League.

Michael Laudrup’s side are currently on a four-match winless run, but they will see the Aston Villa game as a good opportunity to get their campaign back on track.

And with the boss resting quite a few important players in midweek’s defeat to Chelsea, Swansea look a good bet to pile more misery on Villa at 2.70 (17/10).

Michael Laudrup has hinted that he will make wholesale changes to the side that played at Stamford Bridge, meaning the likes of Pablo, De Guzman, Bony, Chico and Davies are set to be recalled.

However, Michu, Nathan Dyer, Michel Vorm and Gary Monk are all out of contention for the trip to Villa Park through injury.