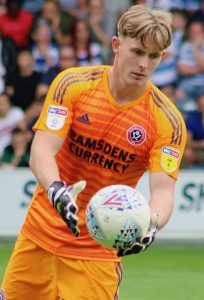 England U21 goalkeeper Dean Henderson has suggested that the side ‘let the country down’ following their elimination from the U21 European Championships in Italy.

The Young Lions were eliminated after only two group stage matches following defeats to France and Romania. Manchester United stopper Henderson has told that Aidy Boothroyd’s talented squad have fallen way below expectations this summer considering they were one of the favourites to win the tournament.

Talking to Sky Sports after England’s 4-2 defeat to Romania last time out, he said: “Whoever goes on to win the tournament we know we can beat them as well. It is a shame.

“It is a shame because we said in the team huddle that for some of us it will be the last opportunity to play in a major tournament for England.

“With the group of players we have really under-achieved. We wanted to come here and win this tournament.”

The team now have one last chance to impress at the tournament as they battle with Croatia in their final group game.

Despite having already suffered elimination, England are favourites to win the match and can be backed at a price of 4/6 with Paddy Power.