AC Milan not giving up on Andrea Belotti 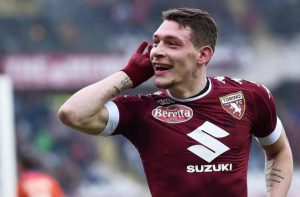 Torino striker Andrea Belotti was one of the hottest properties in world football last season, following his impressive break-through season with the Serie A side.

The 24-year-old hit 26 goals in 35 appearances during his second season with Torino, putting in a solid run of top-class appearances which got some of Europe’s biggest names hot on his trail.

The likes of Chelsea, Manchester United and AC Milan were all heavily linked with Belotti throughout last summer but his €100 valuation turned out to be the biggest obstacle in any potential deal.

Torino were reluctant to budge on their asking price and the Italy striker ended up remaining with El Toro.

The combination of injury and poor form has seen Belotti suffer a significant dip in form this season, however. The striker has been limited to only four goals thus far compared to 14 he scored by mid-January last year.

Low numbers haven’t put AC Milan off, however, with sporting director Massimiliano Mirabelli confirming that Rossoneri are still very much fond of the Italian striker – just as Belotti himself remains a fan of one of the biggest clubs in Italy.

“He’s a good player, a Milan fan and who knows… maybe one day he’ll wear the shirt that he dreamt of wearing as a child.”, Mirabelli commented.

AC Milan invested heavily in new signings last summer, exceeding the €100 million mark but the expected results never came. Rossoneri are struggling to make it into the fight for European places and could once again miss out on the Europa League and Champions League.

Rossoneri are currently 20/1 betting odds to make it into the top 4 of the Serie A.

As a club with a registered $300 million loss over the past three seasons, AC Milan had a quiet January transfer window and it will be interesting to see whether the new owners will allow new funds in the summer.