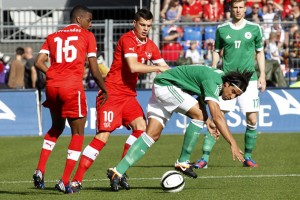 Switzerland made a giant step towards the 2018 World Cup finals in Russia with a 1-0 win in Belfast and they are now expected to finish the job in the return leg.

Northern Ireland fell victim to a controversial penalty awarded to the opposition, but given their poor performance, they will have to do much better if they want to keep this tie alive.

Switzerland will probably go down as the only European side that failed to secure automatic World Cup berth despite winning nine of ten qualifiers.

The 2-0 loss to Portugal on the final day meant that the Rossocrociati had to take part in the play-offs, but they easily outclassed Northern Ireland in the first leg.

Switzerland did score the winning goal from a penalty that should not have been awarded, but it was nothing less than what they deserved for another impressive display.

Vladimir Petkovic’s men completely outplayed their opponents, creating a host of good chances to score, but Haris Seferovic and Xherdan Shaqiri failed to convert any of those.

Switzerland are, nonetheless, in full control of the tie after the 1-0 triumph in Belfast and they are priced at 1.53 (8/15) to win the return match as well.

It remains to be seen whether Valon Behrami will be fit to play, but he is unlikely to be risked given the good result from the first leg.

Northern Ireland have been on the major uptrend over the last few years and they impressed on their return to the biggest stage, reaching the Last 16 at the Euro 2016 finals.

Michael O’Neill’s side did well to reach the 2018 World Cup play-offs, pipping Czech Republic to the second place in their group, but it looks as though they will not be heading to Russia.

Northern Ireland were pretty disappointing in the first leg against Switzerland, but they had every right to be furious with the match officials.

Namely, their opponents were awarded a non-existent penalty that eventually decided the winner, and it remains to be seen whether Norn Iron can use that extra motivation to show some improvement in Basel.

Stuart Dallas is a major doubt after he was forced off with injury early on in the first leg, while Corry Evans is banned after picking up the second yellow card.