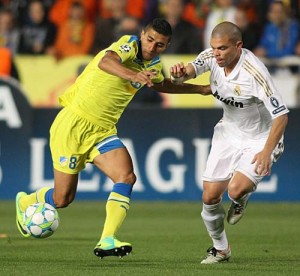 Real Madrid are already through to the Champions League semi-finals after the 3-0 win in Nicosia, but los Blancos will be looking to keep the rich vein of form and record another comfortable victory.

In spite of the heavy defeat in the first leg, APOEL can be proud of what they’ve achieved this season and the Cypriot side will try to finish this campaign on a high.

Real have been playing great football this season, but back to back draws against Malaga and Villarreal were seen as a sign of problems.

Los Blancos were under pressure to improve as Barcelona narrowed the gap to six points, but they reacted well to the minor setbacks and went on to record three convincing victories in all competitions.

Jose Mourinho’s men were forced to work hard for the win in Nicosia, but their sheer quality eventually shone and helped them record a 3-0 win at Neo GSP Stadium.

Nobody could expect that APOEL would progress from the group stage, let alone make it to the Champions League quarter-finals, but the Cypriot side kept defying the odds and they have got to be congratulated for their European exploits this season.

The Cypriot champions were unlucky to be drawn alongside high-flying Real Madrid, but they, nonetheless, managed to keep their more illustrious opponents at bay for over 70 minutes in the first leg.

APOEL ended up suffering a heavy defeat as the scoreline was a bit harsh on them, and the best they can do now is try and avoid an embarrassment at Santiago Bernabeu.

The good news is that influential midfielder Gustavo Manduca returns to the side from suspension, but Marcelo Oliveira, Ivan Trickovski and Panos Constantinou are out through injury.

Compare and find the best Betting Odds for this week's Champions League games
We Highly Recommend These Places
Share your Opinion!