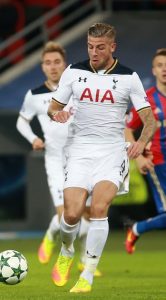 Tottenham Hotspur defender Toby Alderweireld has admitted that he hopes to return to former club Ajax in the future.

The Dutch centre-back came through the club’s academy, making his debut in 2008. He continued to represent the Amsterdam outfit until 2013, chalking up 186 appearances before a move to Spanish outfit Atletico Madrid.

Talking to Dutch publication De Telegraaf, Alderweireld that he harbours hopes of returning to the Amsterdam ArenA at some point in the near future but suggested that it could be some time before he does make that move.

“At this moment in my career I don’t think about that yet. I think I can go on for years at this level. If I ever did, it is not to take it easy.

“I do not want to be 36 years old and can hardly walk. When I return, I certainly want to leave something. And not only in the dressing room.

“Of course it is close to home in Belgium and I have a bond with the club, because I played football at Ajax for eight years, achieving championships.”

The 29-year-old has enjoyed a successful spell with Tottenham since 2015, eventually being linked to Manchester United throughout the summer months.

He does actually make his return to the Netherlands on Wednesday night as Spurs take on PSV in the UEFA Champions League. The defender can be backed at 50/1 with William Hill to open the scoring.