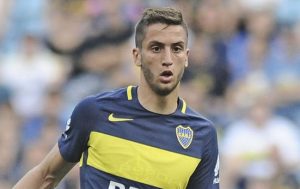 Highly-talented Boca Juniors midfielder Rodrigo Bentancur has completed his Juventus medical yesterday as the Serie A champions make another huge step towards a €9 million summer transfer for the 19-year-old prospect.

The Uruguay international is described as one of the most promising young midfielders in world football and his pending move to Turin is seen as another shrewd piece of business from the Bianconeri.

Juventus have become proper experts in signing talented players at reasonable prices and turning them into genuine world-class players before selling them to make significant profit.

In addition, Juventus have become a desired destination for well-established players such as Patrice Evra or Dani Alves, who joined Bianconeri without any financial compensation.

And when it comes to Rodrigo Bentancur, the backstory of his Juventus move will offer an even deeper insight into Juventus’ impressive transfer dealings.

Juventus have succeeded in securing a first-option clause on the Uruguay player two years ago, when they sold Carlos Tevez to Boca Juniors. The two clubs agreed on a €9 million fee and a future sale percentage clause for the then 17-year-old teenager, who went on to alarm several Europe’s big-name clubs including AC Milan.

Rossoneri attempted to sign Bentancur for €14 million, but were reluctant to accept on a percentage of profit from next sale, which ultimately cost them the signature of this highly promising youngster.

Having successfully passed his medicals, Bentancur will join Juventus in the summer when the club coaches will decide if he will remain with the first-time or be given a chance to gain experience on loan elsewhere.

Juventus will play Napoli for the second time in three days as they prepare to travel to San Paolo for the return leg of the Coppa Italia semi-final.

Juventus are carrying a 3-1 lead into the clash and are priced at 1.57 (4/7) to remain unbeaten against Partenopei.