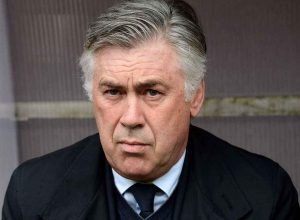 Napoli manager Carlo Ancelotti has suggested that the Italian outfit will not be experiencing a busy transfer window this winter.

The mid-season transfer window opens in January, and some clubs could be expected to make plenty of significant movements, however Ancelotti has suggested that Napoli will not be one of those.

Speaking in a press conference if he was planning any arrivals, the Italian said: “No, to be honest. Unless they are joking with me, I can tell you this now.

“The squad satisfies me. An extra arrival would cause some problems in the management, while a departure would see a decrease in quality of the team.

“There will not be a sale unless someone is chained to Castel Volturno [the training ground], desperate to leave. Until now, they all seem to be happy.”

The Partenopei have previously been linked to Stuttgart defender Benjamin Pavard. However, Ancelotti has suggested that the Frenchman is not set to sign for the club.

He said: “We cannot talk about Pavard right now.

“It would show a lack of respect for [Elseid] Hysaj, [Kevin] Malcuit and [Nikola] Maksimovic, who have played in that position and who I am very happy with.”

Napoli, meanwhile, sit second in the Serie A table but eight points behind leaders Juventus. They can be backed at 8/1 to win the league with BetVictor.