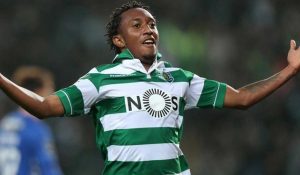 The 21-year-old talent is attracting interest from Red Devils, who will reportedly face stern competition in Real Madrid.

Los Blancos are also believed to be closely monitoring the Portugal international, who has broken into Sporting Lisbon’s senior team in 2015.

Martins have grabbed the limelight however with a sparking display for the Portuguese giants in their 2-1 defeat to Real Madrid in the UEFA Champions League.

Sporting Lisbon starlet is a versatile forward who can play on either wing or behind the striker.

He has been in impressive form this season with 2 goals and 3 assists in seven appearances for the Lions in all competitions thus far.

Mourinho is believed to be extremely interested in the exciting prospect, who would add depth to United’s problems at wing.

Gelson Martins is regarded as a long-term solution for the right side and Red Devils are likely to attempt to recruit the Portuguese teenager as early as January.

Manchester United sent their scouts to Portugal on Tuesday night to watch the talented winger in action against Legia Warsaw in the UEFA Champions League. Martins started the game and features until the 76th minute of the match in which Sporting Lisbon managed to grab their first three points of the European campaign.

Gelson Martins has been widely regarded as one of the brightest talents in Portugal and Sporting president Bruno de Carvalho has already expressed his intention to extend the player’s contract and tie him down on a long-term deal in order to guard off his prized asset.

Manchester United prepare to face the Ukrainian side FC Zorya Luhanks in the UEFA Europa League on Thursday and can be found at 1.70 (7/10) @Coral to grab a HT/FT win at Old Trafford and make amends for the disappointing loss to Feyenoord last time out in the competition.