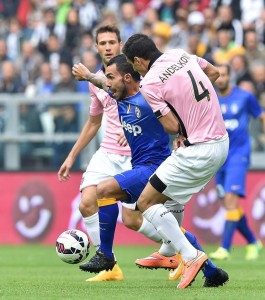 Palermo slipped to 11th following the second successive goalless draw, but they probably wouldn’t mind another such result as the Rosanero play host to leaders Juventus.

Having increased their advantage at the top with a narrow win over Sassuolo, the Bianconeri are expected to rest some star players at Renzo Barbera, with Champions League clash against Dortmund clearly the priority at the moment.

Led by amazing Paulo Dybala and Franco Vazquez, Palermo were one of the surprises packages of the season, but the Rosanero were unable to remain close to the European positions.

The team started struggling after the impressive 5-0 triumph over Cagliari in the first match of 2015, winning just two of next nine fixtures.

And while the Rosanero have already secured Serie A survival, they remain just six points behind Europa League places, and they will want to at least finish the campaign in the top half of the standings.

Palermo may have largely struggled on the road of late, but they remain a force to be reckoned with at their Renzo Barbera.

And having won seven of last ten home games, while recording three draws, Beppe Iachini’s charges are 5.25 (17/4) to shock the Serie A holders.

The likes of Achraf Lazaar and Andrea Rispoli are back in contention, but Geancarlo Gonzalez and Michel Morganella are out injured.

While the opening exchanges hinted that Juventus could have problems in an attempt to defend the Serie A trophy, the Bianconeri have done brilliantly to create an 11-point advantage at the top of the standings.

Unlike their title rivals Roma, the Old Lady showed incredible consistency that had long become one of their strongest weapons.

And with another league title virtually in the bag, Juventus can finally focus on their Champions League campaign and try to achieve European success that has evaded them of late.

But, despite the fact that Max Allegri is expected to field an under strength side against Palermo, you should know that away win pays 1.85 (17/20).

With Andrea Pirlo and Paul Pogba missing out through injury and suspension respectively, Stefano Sturaro is tipped to start in midfield.

Kwadwo Asamoah, Martin Caceres and Romulo are also sidelined, while Alessandro Matri could start his first game since returning to Turin.