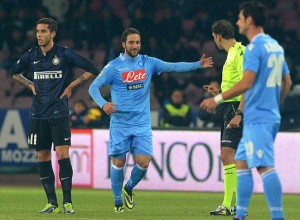 While being locked in the battle for the Serie A trophy, the likes of Napoli and Inter will now be also vying for the place in the Coppa Italia semi-final, with the Azzurri given a home field advantage.

The Stadio San Paolo outfit are enjoying one of the most successful seasons in recent years, as the team have done brilliantly after recovering from a slow start.

Former Empoli coach Maurizio Sarri is proving why he is widely regarded as one of the best tacticians in Italy, as he has taken virtually unchanged squad from Rafael Benitez and turned them into genuine world beaters.

Napoli have been relentless of late, winning five games in all competitions to climb to the Serie A summit, and they already boast a six-point advantage over fourth-placed Fiorentina.

Meanwhile, comfortable win over Hellas Verona saw them reach Coppa Italia quarter-finals, where they are 1.75 (3/4) to see off Inter Milan in ninety minutes.

Coach Maurizio Sarri has hinted he will field his strongest possible line-up against the Nerazzurri, although there are likely to be at least a couple of changes.

There are absolutely no selection worries for the hosts, while Dries Mertens and Manolo Gabbiadini are pushing for starting places.

Just a couple of weeks ago, Inter Milan led the chase in Italian Serie A after a remarkable start, but it looks as though Roberto Mancini’s side have started to crumble under pressure.

In all fairness, the Nerazzurri were never as impressive as their next opponents, recording nine 1-0 wins in the current campaign, but they are now going through a very rough patch.

The problems started ahead of the winter break with the home defeat to Lazio, but a narrow win over Empoli helped Inter remain at the top of the standings.

However, back to back slip-ups against Sassuolo and Atalanta saw the Nerazzurri slip to third in the standings, currently sitting four points behind Napoli.

And having also suffered a 2-1 loss at Stadio San Paolo in November, Inter are available at 6.00 (5/1) to get revenge on the Azzurri.

Having served a three-match ban, Felipe Melo returns to the side, meaning Roberto Mancini will have fully fit squad to select from.