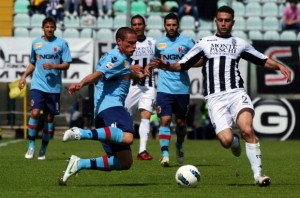 Serie A strugglers Bologna take on Serie B leaders Hellas Verona in Coppa Italia Last 16 stage clash, with both sides hoping to make amends for some under-par results of late.

Felsinei somehow managed to avoid the drop last term, unlike their next opponents, finishing the league campaign four points above the bottom three.

Bologna are not doing much better this season either, although the nine-point cushion between them and the relegation zone can give them some breathing space.

When it comes to the Coppa Italia, Felsinei defeated Trapani 2-0 to set up a clash with Hellas Verona and they now stand a good chance of qualifying for the quarter-finals.

Bologna have been going through a rough patch at the moment, losing three of last four league fixtures, but the 3-1 triumph over Palermo seriously boosted their survival hopes.

Head coach Roberto Donadoni is expected to make some changes for the Hellas Verona clash, but Filip Helander is unlikely to be risked as he carries a back injury.

At the same time, the likes of Luca Rizzo, Simone Verdi and Sadiq Umar are definitely out of contention through injury.

Hellas Verona surprised everyone with a thoroughly disappointing campaign last term, and they didn’t even come close to mounting a serious survival challenge.

However, the Gialloblu have done really well to recover from the failure and they are currently leading the promotion chase in Serie B.

Despite suffering heavy defeats to Novara and Cittadella a couple of weeks back, Hellas Verona sit two points clear at the top of the standings, partly thanks to veteran Giampaolo Pazzini.

The 32-year-old is proving to be too good for second division football as he has now scored 13 goals in as many Serie B fixtures this term.

It remains to be seen whether coach Fabio Pecchia will be making any changes to his starting line-up, but he has some selection worries.

Nicolo Cherubin continues to miss out, while Giampaolo Pazzini, Luca Siligardi, Romulo and Marco Fossati have been training individually, but they should be in contention.