Winning a WSOP package has never been easier 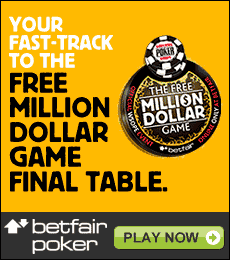 Betfair Poker is eager to give their players a chance to test their skills against world’s best poker players and they have organized plenty of exciting promotions guaranteeing a number of WSOP 2011 packages.

The Good, The Bad and The Ugly

What do you call pocked aces, deuce-seven, and that bastard who took all your money last week? That’s right; The Good, The Bad and The Ugly. Get ready for the exciting points race and climb the overall standings to win amazing prizes.

The promotion runs for eight weeks and Betfair Poker will take your best four weeks to determine your position.

Top 3 players overall will win a $10,000 WSOP Main Event buy-in, while players occupying places 4-150 in the Master Leaderboard will share $40,000 in cash. Weekly races run from Friday to Thursday, starting 1st April and finishing 26th May.

Six days, six tournaments and twelve chances to win $5,700 WSOP Side Event package. Opt in and advance your Players Club level between 1st April and 31st May to earn up to six Shooter Tickets.

Use your Shooter Tickets to play in any of the six Shooter Tournaments taking place over six consecutive days in the first week of June, starting on 6th June, with top two players at each of the tournaments guaranteeing a $5,700 WSOP Side Event package.

Step forward, cough up as little as two bucks, and you could satellite your way into the World Series of Poker Main Event. You’ve got two months to qualify.

Satellites running from now to 5th June. There are twelve daily satellite qualifiers, each awarding a $320 ticket which can be used as a buy in to WSOP Main Event or side event qualifier.