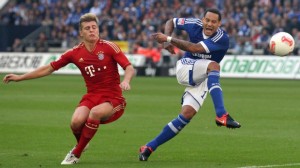 The international break is now over and Bundesliga resumes with a high-profile match between Schalke and holders Bayern Munich.

The Miners need to try and make amends for the opening loss to Eintracht Frankfurt, whereas the Bavarians will want more of the same after hammering Werder 6-0.

Schalke finished the previous campaign just outside Champions League places, so the main objective this season is obviously to achieve a top 4 finish.

The Miners had signed Breel Embolo, Coke and Abdul Rahman Baba in the first month or so of the summer transfer window, but it was the late transfer dealings that could make all the difference this term.

Namely, Schalke managed to seriously improve their midfield department by recruiting Nabil Bentaleb, Benjamin Stambouli and Yevhen Konoplyanka, so everybody is eager to see the trio in action against Bayern Munich.

The Algerian midfielder was so impressive after coming on as a late substitute against Eintracht that he is almost certain to be drafted into the starting line-up.

Dutch striker Klaas Jan Huntelaar is hoping to score his first goal for Schalke in matches against Bayern, having failed to do so on previous three occasions, while Breel Embolo is pushing for a starting line-up after scoring for Switzerland against Portugal.

Not much has changed at Bayern Munich with the arrival of Carlo Ancelotti, as the Bavarians remain as ruthless as ever.

While getting rid of some dead weight, the club further reinforced the squad with the likes of Mats Hummels and Renato Sanches, and the team in turn impressed at the start of the new season.

After recording a 2-0 triumph over arch rivals Borussia Dortmund in the German Super Cup match, the Bavarians recorded two more victories without conceding to show everyone they mean business.

And while nobody was surprised with the 5-0 DFB Pokal win over Carl Zeiss Jena, the 6-0 hammering of Werder Bremen must have been enough to strike fear into Schalke defenders.

Bayern Munich are now priced at 2.30 (13/10) to record yet another win to nil, and they definitely look a good bet to make it four on the bounce.

Jerome Boateng will not be in contention as he slowly builds up his fitness, while Arjen Robben, Kingsley Coman and Holger Badstuber continue to miss out.

However, Douglas Costa and Renato Sanches have recovered from their respective injuries and are expected to play a part.