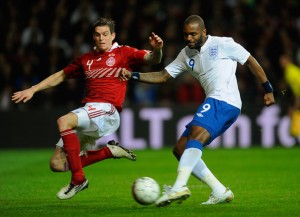 Aston Villa boss Alex McLeish has handed new England manager Roy Hodgson a much needed boost by revealing that Darren Bent could recover in time to play for England at the Euros.

Big Eck confirmed that his star forward was unlikely to play for Villa this season, but also suggested that he could play some part at the European Championships.

“I don’t believe there is a chance of him playing again for Villa this season,” McLeish said.

“The doc thinks he’s got a chance for the Euros though, so if he’s talking he’s talking about four or five weeks.”

“Darren Bent’s absence has been obvious as Villa have slumped down the table without his goals,” said Hill’s spokesman Joe Crilly.

“England could find themselves in a similar situation without Wayne Rooney and Bent’s quality could be much needed.”