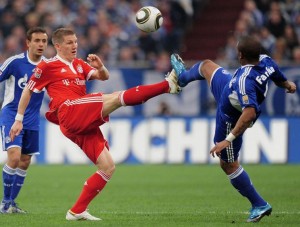 Bayern Munich desperately need a victory in this clash in order to remain in contention for the Champions League place, whereas Schalke will have more important things on their minds with the return leg against Manchester United due just few days later.

Bayern Munich slipped out of the Champions League place after sharing spoils with Eintracht last weekend, although they were lucky to get something from that game since Mario Gomez leveled the score from the spot in the dying moments of the game.

The Bavarians now simply have to win their three remaining games and hope that Hannover will slip up, even though both sides have a pretty easy fixture list.

Despite being one point behind Hannover at the moment, Bayern are seen as odds-on favourites for the third place finish and they are rated 1.42 (21/50) with Betfair to achieve a top 4 finish, whereas Hannover are 2.90 (19/10) to pip them to the third place.

The hosts will receive a welcoming boost with Arjen Robben back from a two-match ban, but Ivica Olic and Hamit Altintop remain sidelined.

Bastian Schweinsteiger, Miroslav Klose, Breno, Thomas Kraft and Mario Gomez all missed some training this week, but they are, nonetheless, expected to be fit to face Schalke.

Having already secured Bundesliga survival, Schalke will have no special motives in this match, although the players will be looking to make amends for the Champions League defeat to Manchester United.

Ralf Rangnick’s men simply couldn’t match a side like Manchester United and they were lucky to concede just two goals, but they are, nonetheless, already out of contention for the place in the final.

Following the draining game against United and before the return leg at Old Trafford, coach Ralf Rangnick could decide to rest some of the starters in this match, especially since not even a full strength side can guarantee him a good result at Alianz Arena.

Anthony Annan should return to the side after being ineligible for the Manchester United game, but Klaas Jan Huntelaar, Christian Pander, Tim Hoogland and Mario Gavranovic remain sidelined.