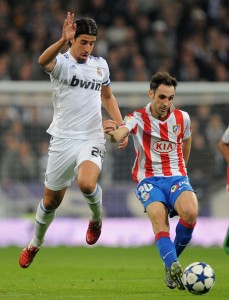 Atletico Madrid have gone eleven years without beating their fierce rivals at Vicente Calderon and there is no doubt los Colchoneros will give their best to finally end the embarrassing run.

Atletico have shown some improvement lately as they are unbeaten in last five games, while boss Quique Sanchez Flores can be delighted that Kun Aguero has rediscovered his scoring form.

Having scored three goals in last two games, Kun Aguero is 3.20 (11/5) at Sportingbet to score against Real as well.

Quique Sanchez Flores has no fresh injury worries and he is set to field the same side that started the Almeria game, with Aguero, Forlan and Reyes expected to cause Real defenders all sorts of problems.

Even though it looked that Real would be in for another disappointing season, los Merengues managed to turn things around in the last few weeks and they are now playing with a lot of confidence.

After closing the gap behind Barca to five points thanks to three wins in a row, Real demonstrated great football as they beat Lyon 3:0 to make it to Champions League quarter-finals.

That game showed just how much Real have progressed under Jose Mourinho and now los Blancos are expected to continue in the same manner. Real are 1.62 (8/13) at Paddy Power to win at Vicente Calderon.

Jose Mourinho has no fresh injury worries, meaning he is likely to field the same side that beat Lyon in midweek.