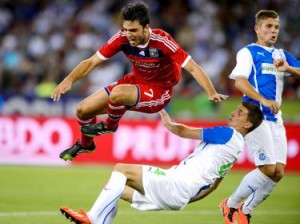 French giants Lyon head into the high-profile fixture against very good Atalanta side hoping to end a three-match winless run on all fronts.

Orobici, on the other hand, have been playing some great football of late and they plan to make another important step towards the next stage.

Lyon are slowly trying to return to old glory days, and with the new stadium now out of the way, the club can focus on improving their position in both France and Europe.

Les Gones squad underwent major changes in the summer, so head coach Bruno Genesio was always going to have his work cut out for him.

Lyon enjoyed a bright start to the league campaign, taking 11 points from first 5 fixtures, but they then suffered back to back setbacks against PSG (0-2) and Dijon (3-3).

As far as their Europa League campaign is concerned, les Gones were denied a win at Apollon as they conceded deep in injury time after taking the lead through a Memphis Depay penalty.

This means that Lyon need to try and return to winning ways against Atalanta, and they can be backed at 1.95 (19/20) to succeed in their quest.

The likes of Rafael, Fernando Marcal, Pape Diop and Amine Gouiri all missed the weekend’s clash against Dijon, but Marcal should be back to the side.

Despite boasting arguably the best youth academy in Italy, Atalanta never quite managed to build a squad capable of mixing it up with the best in Serie A, that is until last season.

Under the command of Gian Piero Gasperini, Orbici impressed to achieve a top 5 finish in the league, and even the top sides that stayed behind them in the standings had to concede it was well deserved.

The club once again saw several star players leave in the summer, but they signed very good replacements, while the best piece of business was holding on to playmaker Alejandro Gomez.

The Argentine has been absolutely unplayable at the start of the new season, helping Orobici embark on a five-match unbeaten run after a slow start.

Having hammered Everton 3-0 in their opening Europa League fixture, Atalanta are available at 4.20 (16/5) to win at Parc OL.

Andrea Petagna, Andrea Masiello and Robin Gosens will be recalled to the side, but Rafael Toloi and Joao Schmidt are out and Jpsip Ilicic is doubtful.