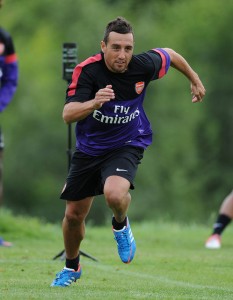 Media reports in England are suggesting that Spanish midfielder Santi Cazorla could make his long-awaited return in weekend’s fixture against Norwich.

The Spaniard has been out with an ankle problem for about a month, having picked up an injury while on international duty.

He has been building his fitness of late and there is a chance we could see him in action immediately after the international break.

Meanwhile, Arsenal boss Arsene Wenger is also hoping to have Theo Walcott back to the side, which should serve as a big boost at a time when the Gunners are battling hard to remain at the top of the Premier League standings.

With Bacary Sagna also nearing his return from hamstring strain, good times appear to be ahead for Arsenal, who are 1.30 (3/10) to see off Norwich on Saturday.

Meanwhile, the current Premiership leaders look a good bet to lift the league title this season, at odds of 6.50 (11/2).

Three days after the Norwich game, the Gunners resume their Champions League campaign with a home clash against Borussia Dortmund, and no doubt they go into the high-profile match full of confidence having already beaten Marseille and Napoli.