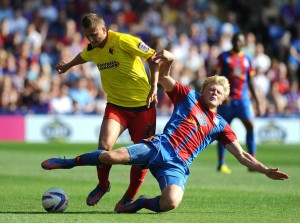 Crystal Palace and Watford are set to a contest a £120 million game at Wembley, so no doubts nerves will play a part in deciding the third team to gain promotion to the Premier League.

The Eagles recovered well from three opening defeats to climb to promotion places, but the team have been far from impressive since the turn of the year.

They did enjoy another good run of results in February, but everything started taking the wrong turn since that point.

A victory over Peterborough on the final day of regular season saw them squeeze into the play-offs, but Crystal Palace then produced a big surprise and pipped very good Brighton side to a place in the final.

Manchester United-bound Wilfried Zaha scored a brace in the return leg to help his team record a 2-0 aggregate victory and he will now be the main threat for Watford defence as well.

Crystal Palace are 3.40 (12/5) underdogs with Betfred to win the clash in regular time, but we are not prepared to write them off just yet.

Top scorer Glenn Murray continues to miss out, while Paddy McCarthy and Jonathan Parr are also out injured at the moment.

Buoyed by the heavy summer recruitment, Watford quickly nominated themselves as one of the main candidates for promotion, but they ended up narrowly missing out on automatic berth.

Their failure to beat Leeds United on the final day of regular season allowed Hull City to achieve a second-place finish, while the Hornets had to enter the play-offs.

Things looked tricky after the 1-0 defeat to Leicester in the semi-final first leg, but Gianfranco Zola’s side did well to take a 2-1 lead in the return match.

And just when it looked as though they would be eliminated with the Foxes awarded a last-gasp penalty, Manuel Almunia proved the hero as he saved the penalty as well as the follow up, allowing his team to start a counterattack that ended with Troy Deeney scoring to make it 3-1.

With the confidence sky high following such an amazing comeback, it is hardly surprising Watford are 2.40 (7/5) favourites with Stan James to win in regular time.

After Championship Player of the Year Matej Vydra scored a brace against Leicester, the Czech is 2.60 (8/5) with BetVictor to score at Wembley.

Gianfranco Zola has absolutely no fresh selection problems and he is tipped to name the same line-up that started against Leicester.

Get Your £25 Cash Bonus!
Premier League mobile betting with PaddyPower get £50 for FREE
We Highly Recommend These Places
Share your Opinion!