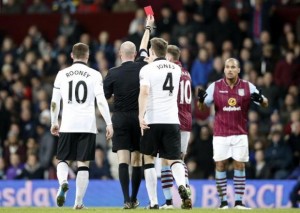 Premier League outfit Aston Villa have confirmed they will challenge the red card shown to star striker Gabriel Agbonlahor in the 1-1 draw against Manchester United.

The experienced forward received a straight red card for a second-half challenge on former teammate Ashley Young, but the Villans believe he should not have been sent off.

“I didn’t think it was a sending off,” manager Paul Lambert told BBC after the match in question.

“Ashley Young has said to Brad Guzan that he made the foul on Gabriel Agbonlahor. That was not a sending off, everyone in the ground saw that.”

Aston Villa have now launched an official appeal as they hope to have the striker available for the Boxing Day clash against Swansea, where the Villans are 5.25 (16/5) to win at Liberty Stadium.

Gabriel Agbonlahor, 28, has been almost ever present for Paul Lambert’s side this season, making 16 Premier League appearances and scoring 3 goals in the process.

In case his ban is upheld, the former England international will return in the home game against Sunderland, scheduled for 28th December.