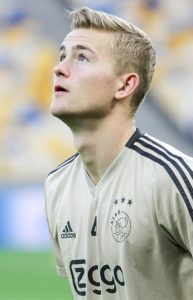 Ajax captain Matthijs De Ligt has agreed a big-money move to Juventus, according to reports.

Rumours in Italy and Holland have suggested that the Turin giants have agreed to pay £62million for the centre-back and are now set to open talks on a deal that would see him complete his switch.

The 19-year-old has constantly been linked with a move away from Ajax throughout the summer with a transfer to the likes of Barcelona, Paris Saint Germain and Manchester United, amongst others.

The attention surrounding the Dutchman comes after a couple of brilliant seasons in Amsterdam. After breaking through into the starting lineup  during the 16/17 season, he has gone on to make 117 appearances for the club, scoring 13 goals.

His most recent campaign at the Johan Cruyff Arena was arguably his most impressive. He captained the side to a domestic League and Cup double, whilst the side also managed to reach the UEFA Champions League semi finals.

De Ligt’s performances for Holland have also been eye-catching as they reached the final of the inaugural UEFA Nations League.

Bookmakers odds reflect the reports of him soon agreeing a switch to Juventus. The Dutchman can be backed a price as narrow as 1/8 with Betfair.