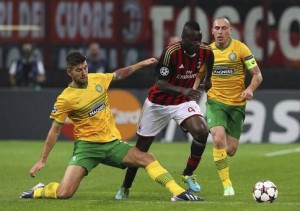 The two sides are evenly matched after the first leg at Parkhead ended goalless seven days ago, and they both harbour hopes of reaching the next stage.

Celtic were the dominant force in the first match, but they failed to turn that dominance into goals and they will have to be more ruthless if they want to make it to the play-offs.

Following a somewhat disappointing period, Rosenborg are slowly returning to the right track and they are hoping for some European success as well.

RBK reclaimed the league trophy in 2015 after a four-year drought and they did well to defend it last year, this making it to the Champions League qualifying stages.

Rosenborg then failed to impress against Dundalk, needing extra time to eliminate the Irish side, but they showed a great deal of improvement to hold Celtic to a goalless draw.

Having also won three of last four league fixtures, bagging three or more goals in each of those, Kare Hedley Ingebrigtsen’s men head into the all-important game in good spirits.

Rosenborg are set to sign Morten Agnes Konradsen from Bodo/Glimt, but he will not be in contention for the Celtic game.

Celtic did achieve a historic success of winning domestic treble without a defeat last term, but they now need to validate said result by making it to the CL group stages.

That will be no easy task after the failure to defeat Rosenborg at Parkhead, but Brendan Rodgers’ men get another chance to make things right.

The 5-0 friendly win over Sunderland will definitely serve as a confidence boost ahead of the return leg at Lerkendal Stadion in Trondheim.

There were more good news for manager Brendan Rodgers as Leigh Griffiths resumed full training after recovering from injury and he is set to start.

With Moussa Dembele also sidelined, the Bhoys played without a recognised striker a week ago, and that was probably the main reason for their failure to score.

Important defender Erik Sviatchenko has returned to training as well after overcoming a groin problem and he is in line to start as well.