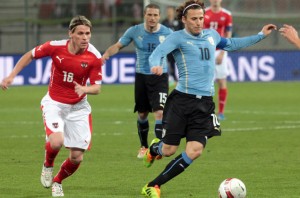 It is not by accident that Uruguay have chosen Northern Ireland as opponents in their first warm-up game at Estadio Centenario as La Celeste aim to prepare in the best way possible for the second group game against England.

Meanwhile, the Irish arrive in Montevideo with a severely weakened side, but very motivated to test their skills against one of world’s strongest sides.

Uruguay have established themselves as one of the best national teams in South America over the last few years and they have high hopes for the upcoming World Cup.

La Celeste were placed in a very strong group alongside Italy, England and Costa Rica, but they are confident they can progress to the next stage.

Boss Oscar Tabarez was very unlucky to have his star player Luis Suarez pick up a knee injury, but the latest reports suggest he should be ready for the tournament finals.

And even with the Liverpool striker missing, Uruguay remain hot favourites to defeat Northern Ireland, with home win paying 1.25 (1/4).

Oscar Tabarez doesn’t have too many problems at the moment, with Diego Godin the only player likely to miss out having only recently joined the squad after taking part in the Champions League final.

Northern Ireland are looking to show some improvement following yet another disappointing campaign, where they could only win one game, albeit against group winners Russia.

Talented coach Michael O’Neill has remained at the helm, and the Irish indeed showed some promise in international friendlies, losing 1-0 to Turkey before holding Cyprus to a goalless draw on the road.

However, repeating another such result could prove to be a very difficult task and not only because Uruguay squad are brimming with quality and experience.

The fact of the matter is Michael O’Neill will be without a number of star players in Montevideo, meaning anything but a heavy defeat can be considered a good result.

The likes of Jonny Evans, Kyle Lafferty, Alex Bruce, Chris Brunt, Gareth McCauley and Jamie Ward are all unavailable, while five uncapped players could be handed their debuts.