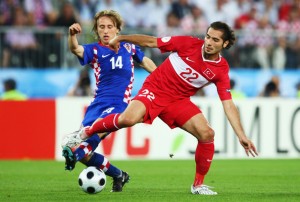 Following the controversial defeat to Ukraine, Turkey face a must-win game against group leaders Croatia, who hold a five-point advantage over Mircea Lucescu’s side.

Vatreni narrowly defeated Kosovo on Sunday after the original fixture was interrupted due to a waterlogged pitch a day earlier.

Turkey haven’t quite managed to live up to the billing in recent years, and they could now miss out on yet another major tournament.

The national team chiefs decided to sack head coach Fatih Terim in July after he was involved in a restaurant incident, bringing former Shakhtar Donetsk boss Mircea Lucescu to replace him.

However, the new boss had a pretty disappointing start as his side suffered a 2-0 defeat in an important match against Ukraine.

Turkey were unfortunate to concede two goals that should not have stood, but they have no choice but to turn towards the Croatia game.

The new boss did manage to persuade star player Arda Turan to come out of international retirement, while veteran midfielder Emre Belezoglu is also included.

Croatia did fairly well at the Euro 2016 finals, narrowly losing to eventual champions Portugal in the last 16 stage.

Vatreni then enjoyed an excellent start to the 2018 World Cup qualifiers, winning four of first five games and only sharing spoils with Turkey at home.

However, the team have suffered a dip in form of late, losing to Iceland before toiling against minnows Kosovo, although they remained two points clear at the top with three games to go.

Croatia head into the Turkey game knowing that their opponents will be under pressure and they can be backed at 2.15 (15/13) to record a valuable win.

The visitors have suffered a major blow as key midfielder Ivan Rakitic is set to miss the game in Istanbul through injury, but Mario Mandzukic should play.