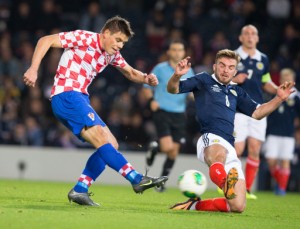 The last-gasp goal they conceded at Wembley could prove the decisive moment of Slovenia’s qualifying campaign, meaning that not even a win over Scotland might prove enough for a play-off berth.

Their opponents, on the other hand, would secure the second position with three points from Ljubljana, but they will not have an easy job on Sunday evening.

Slovenia have been blowing hot and cold in the 2018 World Cup qualifiers, and their under-per performances on the road have been the main issue.

Srecko Katanec’s side had a decent start, defeating Slovakia and Malta, while sharing spoils with Lithuania and England, but their good run proved short-lived.

Slovenia did manage to win next two home games against Lithuania and Malta, but they lost to Scotland, Slovakia and England on the road, thus all but ending their qualifying hopes.

Things could have been different had they held on to a goalless draw at Wembley, but Harry Kane’s goal deep in injury time left them three points behind second-placed Scotland.

The only way how they can now finish in second place is if they record a big win over Scotland and Slovakia fail to beat Malta at home, which seems like mission impossible.

Valter Birsa and Rene Krhin are banned after picking up yellow cards vs England, while key midfielder Kevin Kampl misses out through injury.

With just two games to go, Scotland were in a difficult position, but they have since taken matters into their own hands.

Gordon Strachan’s side did well to defeat Slovakia at home, even if they needed more than an hour to score the winning goal with an extra man on the pitch.

Their domination eventually paid off as Martin Sktrel scored an own goal after pressure from Chris Martin, placing them in a very good position ahead of the final day of the campaign.

However, with third-placed Slovakia facing Malta at home, Scotland will need to win to secure a place in the play-offs, and they are 2.90 (9/5) to succeed in their quest.

Captain Darren Fletcher should play despite suffering an ear injury, meaning Strachan could field an unchanged side in Ljubljana.