Republic of Ireland vs Denmark preview 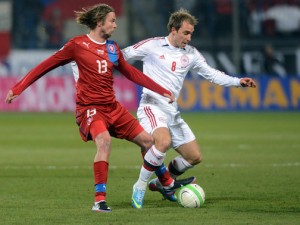 Republic of Ireland held on to a goalless draw in the first leg and now hope to secure the ticket to Russia in front of the packed Aviva Stadium in Dublin.

Nevertheless, many still see Denmark as the favourites to go through, with the Nordic side heavily relying on Spurs maestro Christian Eriksen.

Republic of Ireland performed pretty well in the 2018 World Cup qualifiers, but a four-match winless run threatened to ruin their qualifying hopes.

The Irish, nonetheless, showed a great deal of character to win the final two matches and thus set up a play-off clash with Denmark.

Republic of Ireland were on the back foot for most of the match in Kobenhavn, but they fought bravely throughout and eventually managed to avoid defeat.

The Irish are expected to adopt a cautious approach in the return match as well, and they are available at 2.33 (6/4) to make it through.

James McCarthy, Jon Walters, Richard Keogh and Sean Maguire all miss the play-offs through injury, but there have been no fresh selection worries for Martin O’Neill.

Denmark have fared pretty well under Age Hareide, but they couldn’t keep up with the impressive Poland in spite of the 4-0 victory over Robert Lewandowski and co. at home.

The Nordic side, however, managed to pip Montenegro to a second-place finish thanks to a 1-0 triumph in Podgorica, but they failed to impress in the first leg against Republic of Ireland.

Denmark did dominate the encounter, but were unable to score and now their qualifying hopes hang in the balance.

We still expect the Danes to get the better of Republic of Ireland and suggest backing away win at 2.70 (17/10) with Sportingbet.

Henrik Dalsgard and Riza Durmisi are both out injured, whereas Nicklas Bendtner and Yussuf Poulsen are pushing for starting places.