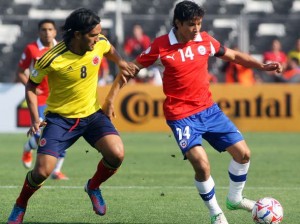 Fiorentina midfielder Matias Fernandez was forced to pull out of Chile’s provisional World Cup squad, the Serie A side announced on their official website.

The 28-year-old midfielder has been carrying an ankle injury over the past few weeks, but the problem was not believed to be too serious.

However, following a medical examination by professor Niek van Dijk in Amsterdam, it was revealed that an arthroscopic surgery is required in order to repair the issue.

After consulting with Fiorentina medical staff, Fernandez decided to have the operation as soon as possible, meaning he will now miss the 2014 World Cup.

The experienced midfielder played an important role in helping La Roja qualify for the tournament finals, scoring 3 goals in 12 qualifiers.

However, having failed to nail down a regular starting berth at Fiorentina, Fernandez also lost his starting place in the national team, which is probably the reason why he decided to have the ankle surgery ahead of the World Cup.

Chile face an uphill task in an attempt to get past the group stage, having been pitted against Spain, Netherlands and Australia, but Jorge Sampaoli’s charges are available at 2.00 (1/1) to qualify.

The good news is that star midfielder Arturo Vidal should be available as his recovery from a minor knee surgery is going according to plan.