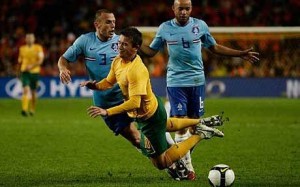 Australia did well to hold Honduras to a goalless draw in the first leg, even dominating the encounter at times, and the Socceroos hope their advanced recovery techniques will give them the extra edge in the return leg over the team that cannot afford access to expensive equipment and will have to dig deep to compensate for the inferior physical shape of their players.

The Socceroos failed to impress in the 2018 World Cup qualifiers, finishing third behind Japan and Saudi Arabia, as inferior goal difference denied them automatic qualification.

Australia have since Syria in a two-legged tie, requiring an extra time goal from veteran Tim Cahill to set up a clash with Honduras.

Even with several important players missing, the Socceroos largely impressed in the first leg, and while they can be happy with a goalless draw, Australia will also rue missed chances.

Ange Postecoglu’s side are priced at 1.57 (4/7) to win the return leg and secure their place at the 2018 World Cup finals in Russia.

The hosts will have Mark Milligan back from suspension, whereas Tim Cahill, Mat Leckie and Robbie Kruse should be available for selection as well.

Honduras were one of the main protagonists of an incredibly exciting finish to the CONCACAF zone of World Cup qualifiers, eventually securing a play-off berth.

La Bicolor came from a goal behind and defeated Mexico on the final day to finish one point above Team USA, thus setting up a clash with Australia.

Honduras didn’t quite manage to prove their worth in the first leg, and they faced serious problems ahead of the return match in Sydney.

While their opponents traveled in style via a luxury charter flight, La Bicolor needed 48 hours to reach Australia, with half of the squad flying in economy class.

It is clear that Honduras will be disadvantaged given the circumstances, but head coach Jorge Luis Pinto hopes his side will overcome all the adversities and reach the tournament finals.