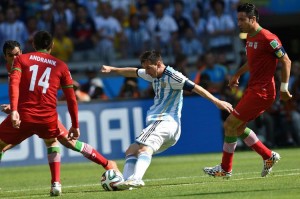 Having made a giant step towards the next stage by defeating Bosnia, Nigeria are aware they will only crash out of the group phase if they lose to Argentina and Iran win their match.

Meanwhile, Los Albicelestes only need one point to secure the first place in the standings, but we can trust them to try and win this clash as well.

Despite arriving at the 2014 World Cup as the reigning Africa Cup of Nations champions, Nigeria were predicted a difficult campaign by many.

And the predictions seemed spot on as the Eagles could only muster a disappointing goalless draw against Iran, but they have since showed considerable improvement.

Nigeria impressed in their second group game to defeat Bosnia 1-0 and thus all but secured their place in the knockout stages.

With the Super Eagles now three points clear of Iran, with a +1 goal difference as opposed to Iran’s -1, they are in a very good position to qualify.

Seeing as how one point against Argentina would clinch the Last 16 stage berth, bear in mind Nigeria are 2.65 (33/20) not to lose in Porto Alegre.

The good news is that the likes of Victor Moses, Godfrey Oboabona and Michael Babatunde have all resumed full training, although Joseph Yobo is set to continue in defence.

Dubbed as the group favourites before the tournament started, Argentina have somewhat lived up to the billing having all but secured the first place in the group.

Nevertheless, two narrow wins over Bosnia and Iran are simply not good enough for Alejandro Sabella’s side and it is clear they will have to show a massive improvement in order to reach the final stages.

The only positive is that star player Lionel Messi has scored in both fixtures, which is going to be a huge confidence boost after he has been criticized for the poor run at the World Cup finals.

And with the Barcelona star unlikely to be rested against Nigeria, he is available at 2.02 (51/50) to score at any time.

Meanwhile, Argentina look a good bet at 1.55 (5/9) to continue the winning run and make it to the knockout stages without dropping any points.

Alejandro Sabella is expected to make some changes with a view to the Last 16 stage, as the likes of Palacio, Lavezzi and Lucas Biglia could be drafted into the starting line-up.