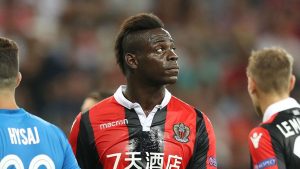 OGC Nice striker Mario Balotelli admits that Patrick Vieira’s arrival at the club convinced him to remain at the Allianz Riviera.

Former Arsenal midfielder Vieira arrived at the club in the summer from New York City FC as he took over from Lucien Favre. Balotelli admitted that prior to the former French international’s arrival at the club, he was set on departing amidst interest from French rivals Marseille.

Talking to Nice’s official website, Balotelli said: “To be honest, at the end of last year, I had the intention to leave and the president and the club knew it.

“I had an offer from Marseille. It was one of the five teams. I don’t know why only Marseille came out. So everyone was thinking: ‘Mario’s going to Marseille.'”

However, the 35-time Italian international admitted that a conversation with Vieira changed his mind. He said: “I spoke with the president and Patrick. They way they talked to me and the proposition was good. I spoke to my agent and I told him: ‘Let’s do one more year.’

“Leaving now, I’m not saying it’s stupid, because maybe I wanted to change before, but I thought about this and maybe it’s better to finish where I feel very good so I didn’t risk to change now when I have only one more year.”

Balotelli has enjoyed an excellent time with Nice following his arrival on a free transfer in 2016. In 66 appearances for the club, he has netted 43 goals, including 26 in all competitions last season. The 28-year-old is yet to get off the mark during the current campaign.

The former Manchester City and Inter Milan man is at 16/1 with SportingBet to bet the top scorer in Ligue 1 this season.