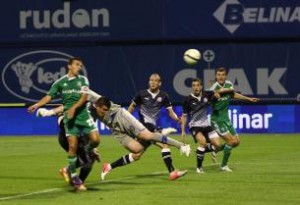 One of the most interesting matches in the second round of Champions League qualifiers will see Slovan Bratislava battle Bulgarian champions Ludogorets at Stadion Pasienky.

By far the most successful club in Slovakia are again establishing domestic dominance, having won two league titles in last three years, but they are largely struggling on European stage.

The Sky Blues managed to reach Europa League group stage during the 2011/2012 season, but could only pick up one point from six matches against Athletic Bilbao, PSG and Red Bull Salzburg.

Having retained domestic title last term by finishing four points above second-placed Senica, Slovan start another Champions League campaign with high hopes, but they face a tricky tie at the start.

However, despite sharing spoils with weak DAC in the opening game of the season, Samuel Slovak’s men are 2.05 (21/20) favourites with bet365 to see off Ludogorets.

With no fresh injuries to report, boss Samuel Slovak could field the same side that started the match against DAC at the weekend.

PFC Ludogorets Razgrad have seriously raised the club’s profile over the last couple of years, winning back to back league titles, while also lifting Bulgarian Cup and Super Cup in 2012.

They were pretty unfortunate to be pitted against Dinamo Zagreb in their first ever Champions League tie, but still managed to produce two good performances, albeit losing 4-3 on aggregate.

Having won their second league title last term, dislodging Levski Sofia from the first place on the final day of the season, the Eagles are hoping to fare much better in their second European clash.

That is easier said than done considering the club stayed without important players Lubomir Guldan and Stanislav Genchev, although they did make some decent signings as well.

Dani Abalo, Hristo Zlatinski, Michel and Fabio Espinho all arrived this summer, but they might need some time to adapt to the new surroundings.

Even so, with their next opponents also far from impressive, Ludogorets look a good bet to win the first leg, with BetVictor paying 4.00 (3/1) on away win.

Midfielders Marcelinho and Miroslav Ivanov are both suspended, but Cosmin Moti has recovered from a minor injury.

Get Your £88 in Free Bets!
Bet In-Play on Champions League football with Bet365 and get £200 for FREE
We Highly Recommend These Places
Share your Opinion!