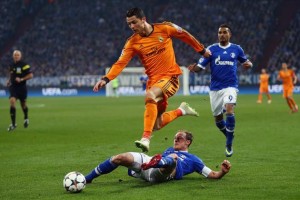 The two sides meet at the same stage for the second year running and no doubt Schalke will have revenge on their minds after last season’s 9-2 aggregate defeat.

Real Madrid recovered well from the embarrassing loss to Atletico Madrid and they aim to make a big step towards the next stage by winning at Veltins Arena.

Schalke have become regular in Champions League knockout stages, having qualified for the Last 16 phase in three of last four attempts.

The Miners even reached the semis in 2010/2011, but have since twice been stopped in the first knockout round, and everything suggests the trend will continue.

Schalke were pretty unfortunate to be pitted against Real Madrid for the second year in a row, as witnessed by odds of 9.00 (8/1) offered on the Germans to qualify.

This match comes at a bad time for the hosts seeing as how they were beaten by Eintracht at the weekend, although that was the first defeat in the second part of the season.

Schalke boss Roberto Di Matteo has reason for optimism though given that star striker Klass Jan Huntelaar returns from domestic suspension and he is available after overcoming a bout of flu.

While first choice keeper Ralf Fahrmann remains sidelined, Fabian Giefer has recovered and is expected to take over from youngster Timo Wellenreuther.

And having hammered Schalke 9-2 on aggregate last term, los Blancos were probably delighted to be drawn alongside the same opposition all over again.

Meanwhile, Real Madrid have been pretty impressive in La Liga, that is until the 4-0 loss to arch rivals Atletico, which saw their advantage over Barcelona melt to just one point.

But, having returned to winning ways against Deportivo La Coruna at the weekend, Carlo Ancelotti’s charges are 1.44 (4/9) to beat Schalke at Veltins Arena.

The Italian coach has a long list of injured players, with the likes of James Rodriguez, Luka Modric, Sergio Ramos, Fabio Coentrao and Sami Khedira all unavailable.

Pepe returns to the side after recovering from injury, while Daniel Carvajal should be recalled to the starting line-up.