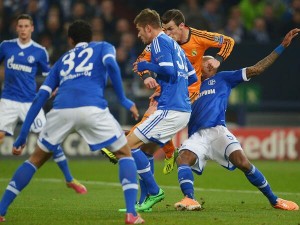 Real Madrid are in full control of the tie after the 2-0 triumph at Veltins Arena, but los Blancos will want to record a morale-boosting win following successive slip-ups in La Liga.

Schalke clearly have a mountain to climb at Santiago Bernabeu, but weekend’s win over Hoffenheim will at least ensure the Miners arrive in Madrid in good spirits.

The Champions League holders have been thoroughly impressive in this year’s campaign, winning all seven matches to come to the verge of the quarter-finals.

And while they were eliminated from Copa del Rey, los Blancos were believed to be cruising towards another league title, having created a four-point cushion at the La Liga summit.

However, the substantial advantage over Barcelona quickly evaporated as Real shared spoils with Villarreal at home before losing to Athletic Bilbao at San Mames.

And having slipped to second in the league standings, los Blancos will be determined to show a response when they host Schalke, so bear in mind they are 1.67 (2/3) for a half-time/full-time win.

Carlo Ancelotti received some good news as both Luka Modric and Sergio Ramos resumed training, with both expected to play a part against Schalke.

The Italian coach is also tipped to make some changes to his starting line-up, with only James Rodriguez missing out through injury.

Schalke were quite unfortunate to be pitted against Real Madrid in the Champions League first knockout stage for the second time running, and nobody was surprised to see them lose the opening leg 2-0.

The Miners did show some promise three weeks ago and could have even avoided defeat, but they are now clearly on the verge of elimination.

Schalke haven’t been too impressive on domestic stage of late either, taking one point from three league games before finally returning to winning ways against Hoffenheim.

As a result, the Miners remain one point behind top 4 positions with ten games to go, meaning they will have to work hard to secure another Champions League qualification.

Coach Roberto Di Matteo will be without Kevin-Prince Boateng, who is banned for the second leg, but full-back Christian Fuchs has recovered from injury.