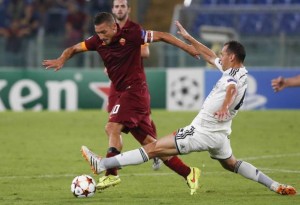 The Giallorossi have recorded seven Serie A wins on the bounce and this gives them confidence going into the high-profile clash in Madrid.

The jury is still out on new Real Madrid boss Zinedine Zidane, who appears to have at least improved the dressing room atmosphere thanks to his close relationship with the players.

When the results are concerned, these have not been too impressive, although several big wins could be a sign of things to come.

After the 1-1 draw with Malaga put a dent into team’s title hopes, the home loss to Atletico Madrid placed extra pressure on the squad, and it is now clear that Champions League campaign has the priority.

Real Madrid made a giant step towards the quarter-finals with the 2-0 win at Stadio Olimpico and they are now 1.40 (2/5) to win the return leg as well.

Zinedine Zidane was delighted to welcome back Luka Modric and Toni Kroos to the squad and both could start against AS Roma.

Gareth Bale and Marcelo have both returned into action, meaning that Karim Benzema remains the only unavailable footballer at the moment.

This season has been a real rollercoaster ride for AS Roma, who has risen from the ashes following the arrival of Luciano Spalletti.

The Giallorossi quickly revived their top 3 bid in Serie A and created a three-point advantage over their rivals for the final Champions League berth, recording seven straight victories.

What is even more impressive is that only one of those was achieved by a single-goal margin, with the team scoring 22 goals in total and conceding 5 during said period.

When their Champions League campaign is concerned, Roma failed to match Real Madrid in the first leg, suffering a 2-0 defeat, meaning they now face a mountain to climb.

It has been revealed that important defender Antonio Rudiger will miss the clash through a thigh problem, with Edin Zukanovic set to replace him.

Radja Nainggolan may be rested as he battles ankle and groin problems, but Edin Dzeko should be recalled as Luciano Spalletti aims to field an attack-minded line-up.